I thought I'd describe my preparations for the BOOK LOGIC Master Classes and Symposium in Sydney, 19–20 March 2010. I took a risk by saying that I'd have something ready to demonstrate by then, but I find that deadlines have a way of inspiring one to get something done. Here are the views I want completed for Sydney. The current test version of this is on the Harpur site. (Only the list and import views are yet done, and only partly.)

The list view, which just lets the user select or delete an MVD, and to create new empty ones. It also lets you categorise them by putting them into folders (and moving them from folder to folder). But you have to log in first to get that utility. This is mostly done, even though the new file button doesn't yet work probably because the external call to the nmerge tool doesn't yet work in PHP for some reason. Almost every digital text archive has need of such a facility, but usually all they have is a long list of HTML links that the user has to read through to find what they want. In the yet-to-be-done Find View the user will be able to locate a particular text by name, description or content and have it selected in this view.

The goal of Import view is to allow almost any kind of text to be loaded after being automatically cleaned up, in the vein of HTMLTidy. Ordinary TEI texts should be usable, as well as plain text. At the moment, though, for the Book Logic demo, I'm only going to implement the basic import facility of nmerge: that is, the texts have to be lightly marked up TEI already used for the current texts in the Harpur and Digital Variants archives. I guess I should publish that format online sometime soon.

Tree View will I hope win over many converts to MVD, by showing them the potential benefits of a format in which all versions of a work are in one file. It just uses the data in an MVD to build a phylogenetic tree or stemma using bioinformatics software. It shows the relationship between the various versions of a work and will expose the options of the tree-generating program to the user, so you can configure the view to suit your own tastes or research interests. No one else has quite this facility online yet that I know of, although tree views of literary texts have of course been done many times before. Here's an example generated by Phylip from the 36 versions of the Sibylline Gospel. This can also be useful even for modern texts. 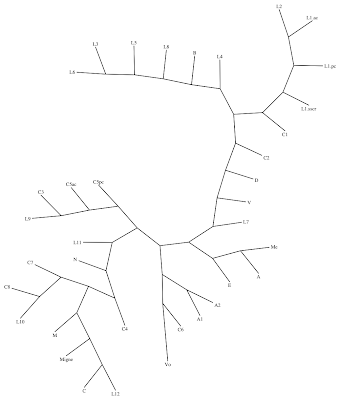 Single view just shows the current text of interest and lets the user read a version of choice, which he/she can change by selecting it from a dropdown list.

Compare view shows two texts side by side and highlights the differences. By clicking on one bit of text on one side the other side scrolls down to bring them into sync. This already works on the Alpha web application, but it has been much appreciated and I thought I would include it in the demonstration in Sydney. Not all version comparison can be done this way - sometimes you need to compare more than two texts, but it's still an undeniably useful view.

Well, that's the plan. Obviously there is still a lot to be done after that to make com_mvd a usable tool, but that's all I'm going to show on the day. And maybe I won't get it all done. Let's see. The workshop is only five weeks away!

I wish to open a file (.mvd) extension and not able to do so. Kindly guide me to extract it.