One of the things that came out of the BookLogic seminar was the suggestion that the single view of the old Alpha application could be enhanced by adding a 'Windowbox' at the bottom of the window. This would display variants for sections of the text visible in the window or all of it. But how would it work?

The problem is that nmerge currently computes the innermost variants of a range of text in a specific version. Since there may be no variants for that stretch of text, it expands the selection outwards until it finds two points where at least one variant joins the selection in the specified version. Since it only expands outwards, this strategy can miss variants that occur within the specified range: 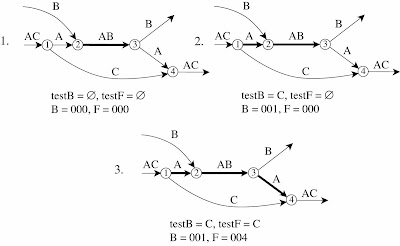 This is not how the apparatus criticus operates. Instead we really should specify a much broader range and then first compute the points to which other versions attach themselves to or split off from the specified version. At each pair of such points sharing a set of versions we would simply print out the variants. The 'Drowning By Versions' problem can be reduced by limiting the variants to those that split off from and rejoin within the specified range and version.

In the sketch above the variants of the selected pink region are B: 'white' for A: 'brown', and B: 'rabbit leaps' for A: 'fox jumps'. The variant 'horse walks around' in version C is disregarded because it does not start and end in the selected region of A.

In addition, the default selected range could be reduced to a narrow strip in the centre of the current window. In highly varying texts, Windowbox might only look for variants of only one line, but not less. This setting would be configurable globally as a parameter for the Joomla component, say the central 50% of the window by default. And if the user selected some specific text, it would automatically update Windowbox with the variants of the selection. Windowbox should also be a collapsable element on the page, so the user can get a clean view of the reading text at any time.

I am really getting close to a first release of the Joomla component. It will only do import, list texts and view single texts, but it will give people a flavour of what it can do and hopefully generate some feedback.

Posted by desmond at 8:27 PM No comments: 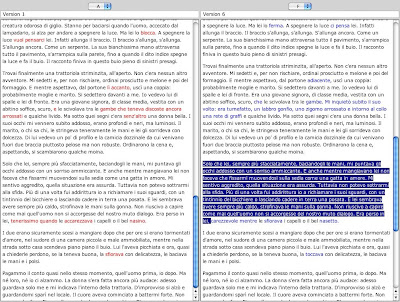 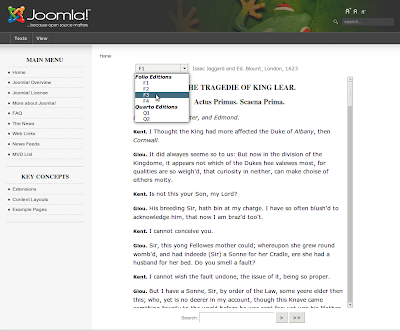 Posted by desmond at 4:59 PM No comments:

The Joomla GUI, which is a replacement for the Alpha web application, is progressing nicely. Although technically I only have incomplete views for listing and choosing the texts, importing into an MVD, and viewing a single version, quite a bit of what is to follow is just an adaptation of the old Alpha application's XSL stylesheets. As a result I expect good progress over the next couple of weeks. It doesn't look like I will have all I wanted for the Book Logic workshop in Sydney after all.

The audience is expected to number around 50 or so, mostly bibliographers, including some famous ones, so it should be a good test. But the majority will be non-technical editorial types so the real challenge will be to get across my ideas to them. Having explained this before I already know that it takes quite a while before people understand the key concepts. But everyone who has listened so far, even starting from a position of extreme scepticism, has in the end always conceded that this is at least an intriguing idea. On the back of that experience, then, conveying anything to 50 people in the space of 10 minutes seems a bit daunting.

Posted by desmond at 1:54 PM No comments: