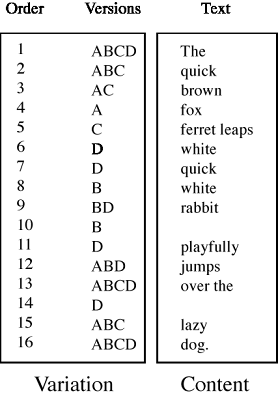 May be I did no understand what you're saying, but I was wondering if it is necessary to exclude from the realm of Multi-Version documents and its representation "multiple drafts of a single text". In the case of Sanvitale, for example (see Digital Variants), we have one short story in eight writing passages. I don't see why these should not be represented by the MVD model.
Domenico

Domenico, the model covers all forms of texts that exist in multiple versions, including "multiple drafts of a single text". If you examine the images of the Sibylline Gospel closely you will see that some of the versions are actually revisions of single manuscripts, just as when the author revises his own text. For example, "A2 (Angers, Bibl. Publ. 26 (22), saec. XIII post correctionem)". There are not so many changes as in genetic texts, but nevertheless there are revisions. When you first commit a text to an MVD you choose the version that is to be its base. In the case of a revised text this is always the previous version. In the case of a separate manuscript it is up to the editor to choose, perhaps the reference text of that recension.

We really need to demonstrate this at Oulu, that the model covers all types of textual variation, both those traditionally covered by the classical and bibliographical models or by the genetic model, and also the kinds of overlapping hierarchies you find in linguistics texts.